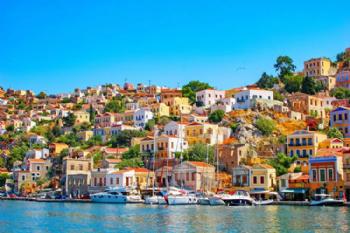 Simi is a small island in the Dodecanese. Although Simi is visited by many people every summer, it has managed to keep its traditional manners. The most important sightseeing in Simi is the Holy Monastery of Panormitis, protector of the island. Located on the southern side of Simi, this monastery is included in the program of all boat tours from Rhodes and can also be visited by boat from Simi Town. In Simi, do not also miss a stroll at the picturesque town of Simi, called Chorio, with Medieval style and fantastic sea views.

The Monastery of Roukouniotis looks like a fortress and dates from the 15th century. Outside the monastery, there is a cypress in form of an umbrella.

The monastery of the Archangel Michael Roukouniotis was built by the Knights of Saint John in the 15th century. The monastery was built on the ruins of an ancient temple. It is situated on the western side of the island, about 5 km from Simi Town.

Roukouniotis Monastery is built like a fortress and the monastery has two temples, the lower temple containing some significant murals from the 15th century. Every year, on the 8th of November, the monastery celebrates its patron saint with a Holy Mass and a big feast. Outside the monastery walls, there is a 100-year-old cypress tree.

Beaches in Symi are actually small coves but attract many visitors for their picturesque environment. Some Simi beaches are organized with tourist facilities, like taverns, bars, umbrellas, and sunbeds like Nos, Emporios, and Pedi. The rest of...

As the island has no airport, the best way to travel to Simi is by ferry. The island bus runs hourly between the southern side of the harbor of Gialos and Pedi Beach via Horio. Panormitis can also be served two to three times a day. Taxis depart from...