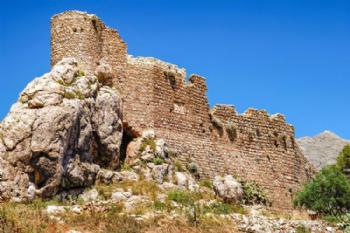 Over the last years, the island of Kalymnos has gradually developed as a rock climbing destination. Its landscape is mountainous and the characteristic feature of Kalymnos is its many caves. The mountains on the northern side of the island and the neighboring island of Telendos are the most popular sites for rock climbing. Other interesting sightseeing in Kalymnos is the Monastery of Agios Savvas and the Medieval Castle of Chryssoheria. Visitors should also not miss a boat trip from the port of Myrties to the island of Telendos, a secluded place with naturist beaches.

This small island was separated from Kalymnos due to an earthquake in 535 A.D. Telendos has a single settlement with 50 inhabitants and a nice landscape to stroll around. It is connected to Kalymnos by boat from Myrties.

The islet of Telendos rises across the northwestern coast of Kalymnos, opposite the village of Myrties. Telendos is separated from the main island by a channel just 700 meters wide. In the ancient times, Telendos was part of Kalymnos, until a massive earthquake in 535 A.D. separated it from the rest of the island. Telendos is rather a barren island.

However, its beautiful landscape gives a unique view. Telendos has got very few inhabitants (about 50) and they are all concentrated in a small fishing settlement. Small boats serve the transportation to and from Myrties. They run frequently during the day, carrying passengers for the 10 minutes journey. Telendos does not have any roads, so it is free from traffic and pollution.

Telendos has got a tiny port that is usually busy with fishing boats. Alongside the port, you can see a number of taverns and cafes that serve traditional Greek food. The islet has been equipped with the basic amenities for tourists, as there are only a few rooms to let. The beaches of Telendos, Paradise and Hoklakas beaches being the most famous, are small and not organized at all, so they are perfect for peace lovers and naturists.

The archaeological ruins found at Telendos suggested the existence of a well-organized Christian culture in the 5th and 6th centuries A.D. The Early Christian Basilica of Agios Vassilios and the Christian burial ground suggest that the islet once accommodated a wealthy and noble society. The traces of ruined houses, churches and cisterns can be still found there. There is the medieval fortress of Saint Constantine situated a little above the port with nice views of the whole island.

Kalymnos is one of the most beautiful yet unexplored islands of the Dodecanese. Some of the most attractive Kalymnos beaches are Emporio, Myrties, Kantouni, and Massouri, which are organized with sunbeds and umbrellas. Other beaches in ...

Visitors can travel to Kalymnos by ferry or plane. Kaiimnos Airport only takes flights from Athens in summer. Ferries departed from Piraeus port 3-4 times a week. Turkey Turgutreis ferry to the island from the port are organized in the summer. Taxi i...