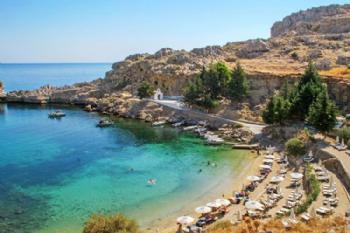 Rhodes has many spectacular beaches and sandy coves. The island offers a large collection of Rhodes beaches with various amenities, including hotels, taverns, bars and watersports centers. All beaches in Rhodes have crystal waters and they are unique in natural beauty. Among the best Rhodes beaches are Tsambika, Saint Paul's bay, Ladiko, Kallithea, and others. The southernmost coast of Rhodes, Prassonisi, is ideal for windsurfing and kite surfing.

The small port of Agios Pavlos in Lindos took its name from Apostle Paul, who was said to land there and teach Christianity. This is a small cove under the Castle of Lindos.

The little bay of Agios Pavlos (Saint Paul) lies 48 km south of Rhodes town and close to the ancient acropolis of Lindos. According to a local myth, the bay owes its name to the lovely white chapel standing on the beach which is dedicated to Saint Paul, who came here in 43 AD and preached Christianity. Golden sand and pebbles compose the beach where sun beds are available for rent. Rocks are boarding the beach, giving the possibility to dive into the clean turquoise waters.