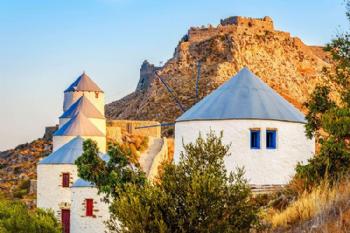 Over the years, this Byzantine fortress, that survives well till today, has become the trademark of the island. The Castle gives a great view to the above mountainous landscape, the sea and the villages of Leros island.

The Castle of Pandeli was probably built in the 10th century on the site if an ancient acropolis and, at the end of the 11th century, it was donated from the Byzantine Emperor Alexius I to the Monastery of Agios Ioannis Theologos. During the Frankish times, the Castle was reinforced by the Knights of Saint John and was used to protect the island and its inhabitants from invasions. In the centuries that followed, the Castle served as a lookout post for the Turkish, Italian and German conquerors of the island. As a result, it suffered a lot of damage.

Today, three circuit walls of the castle are preserved and a church of our Lady stands on the west side of the castle. The church has a magnificent icon and fine wall paintings can be admired. To go to the Castle, you have to climb up a rough road or 400 steps from Pandeli.