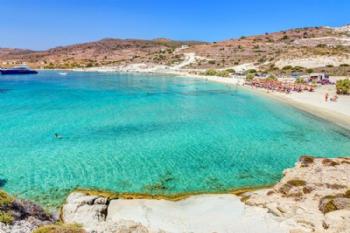 This castle was built by the Knights of Saint John and it is also called the Citadel of the Knights. A little chapel to Panagia Chrysochera is found in the castle, which is located on a hill above Pothia.

The castle of Chrysocheria lies on top of a hill overlooking Chorio village, the ancient capital of Kalymnos. It is close to the cave of the Seven Virgins and was built by the Knights of St John, who ruled the island from the 14th to the 16th century. The objective of this construction was to fortify the city and protect it from possible conquerors and the pirate invasions. This castle was inhabited until the 18th century.

Today, its interior still hosts the well-preserved church of Panagia Cryssochera, which gives its name to the castle. This name means our Lady with the golden hands. The church was named after this because of the icon of the Virgin Mary, in the interior of the church which depicts Virgin Nary having hands covered with a golden leaf. According to the legend, a treasure of gold coins was once found under the floor of this church.

Furthermore, the church of Panagia Chrysochera also hosts some nice Byzantine frescoes. Apart from this church, we can find some other chapels within the castle, dedicated to other saints. On the west side of Chryssocheria castle, there are some ruined fortification walls and a coat of arms that belonged to a Genoan nobleman called Viniali. There are also the ruins of an ancient temple that used to lie in this area, the temple of the Twins.